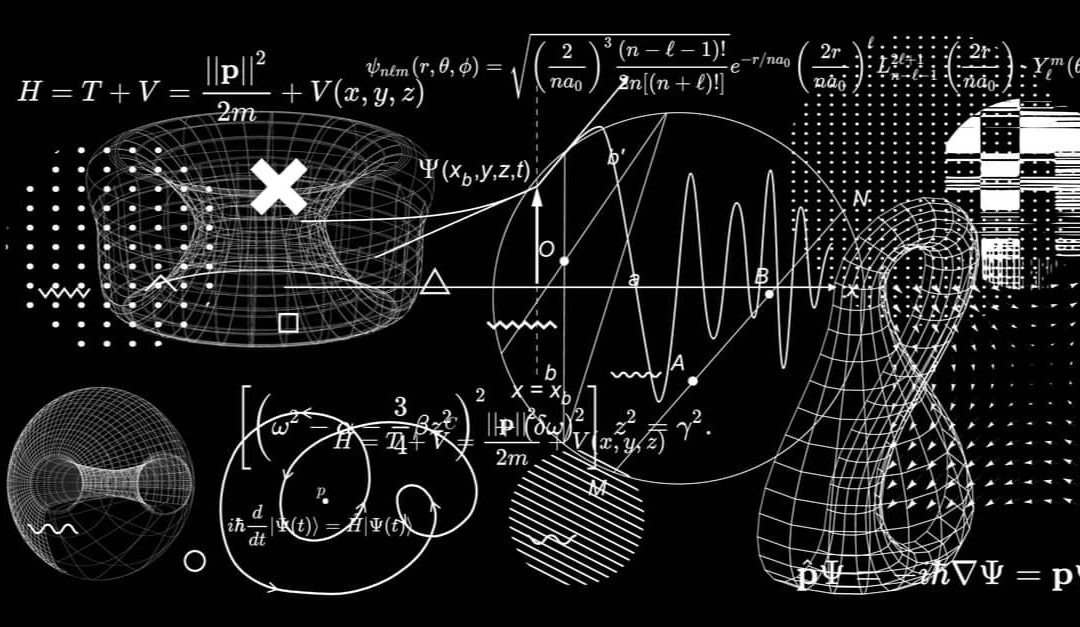 Youve heard people speak about a train wreck. Youve heard people describe something and liken it to a train wreck. Its messy; its jumbled; it looks like something that no one could or would want to try and make sense of if presented with the opportunity. Yet, it is something from which we cant look away. Something about it draws the eyes, and keeps them there, despite the insanity of the way it looks and the way it snags every bit of our need to find a pattern with which to make heads or tails of it, and we cant pull our eyes from it. That is Quantum Field Theory. You wont find many documentaries on it, nor will you find it in the pages of Popular Science unless it is mentioned and left behind quickly, more often than not.

But what is Quantum Field Theory? Again, though it looks like a train wreck jumble of symbols, mathematical formulae, and something one might find written on the walls of a UFO, we humans still attempt to make sense of it. Quantum Field Theory begins with particles and how they relate to each other. The basic foundation of it has to do with the knowledge that things around us, even the parts of our body, can be analyzed by looking at the atoms that make them up and how those atoms behave with other atoms to make up parts of a whole, something with which we are familiar. We analyze things in this way to understand events and happenings, phenomena and entities that occur every day. Quantum Physicists endeavor to explain how basic building blocks of matter behave and to comprehend the laws that fully govern that behavior. In essence, this is where Quantum Field Theory begins.

To explain Quantum Field Theory in an article that does not drone on for chapters on end is a task in and of itself. Nevertheless, this article aims to explain it broadly. We have noted that Quantum Physicists study particles and the laws that govern them. Some of the problems that physicists face when studying the theory begin with the knowledge that each particle has its own system of laws. At a quantum level, the laws of science that govern wood burning and the fire that causes this burn are very different from those that decide the behavior of plant cells and photosynthesis. This means that for each sort of action, at a quantum level, the physics changes. Here is where Quantum Field Theory enters the picture. Simply stated, it is concerned with attempting to unite all of the varying sets of laws that govern different reactions and phenomena into a unified framework that works for everything on a quantum level, instead of having multiple frames for endless events and interactions between particles that make up matter. Scientists have found a Quantum Field Theoretical principle that appears to apply to all quantum scenarios and actions. What is left is applying that principle and testing it against differing behaviors to see that it is indeed a solution. We generally think of atoms as tiny things that move very fast and bump into each other forming bonds. This doesnt really address why all different particle types behave differently, however. Quantum Field Theory attempts to reconcile this by saying that what we think of as particles are not only immaterial but that particles are not real.

To provide an example of things that might clarify this a bit, we turn to the following explanation that sums it up rather succinctly:

Picture a tornado moving through the air. Although we think of it as a self-contained object, we know it is not truly a thing in its own right. It is just a fluctuation, whipped together from the surrounding air. The same can be said for a wave undulating across the surface of the ocean. It looks like a distinct entity moving independently of the placid water around it, but we know that the wave and its surroundings are really made from the same stuff. This, according to quantum field theory, is how we need to understand particles. In quantum field theory, empty space is not genuinely empty. It is filled with what physicists call fields fluid-like substances that extend in all directions. Just like the water in our ocean analogy or the air in our tornado analogy, these fields are typically dormant. Still, if they get agitated, pockets of turbulence can bubble into existence and move around as if they were separate objects. We call these little clots of energy appearing in the field quanta or if you prefer, particles. The particles we use in normal physics to describe the world are not really lumps of stuff moving through space; they are miniature tornadoes formed from the all-pervading fields which flood our universe. Particles are, in a sense, an illusion.

Given that it is this complex, one might think experiments would be flawed and unyielding when attempting to apply Quantum Field Theory to phenomena. Youd be wrong. Quantum Field Theory has predicted many discoveries, the Higgs Boson particle, for example, and antimatter. It has also made unifying the different quantum theoretical laws that apply to different events, a reality, in a way. We can begin to examine things using Quantum Field Theory because it tells us that matter is not really a set of particles, per se, but more akin to a series of blanketed fields that overlap and bump together, forming matter and all we see around us. The specifics have not been isolated, nor have we even begun to scratch the surface in fully understanding Quantum Field Theory. When Paul Dirac, the first scientist to propose its existence in the 1920s, first realized the theoretical underpinnings of QFT, one would imagine that he knew that it would be far-reaching and paradigm-shifting. We see now that it has been. Using Diracs ideas, we have probed farther into the meaning of existence and why matter behaves as it does. In a sense, this makes the continued study of Quantum Field Theory all the more valuable. It may someday provide answers to our most fundamental questions about life, the universe, and even the beginning of all things.