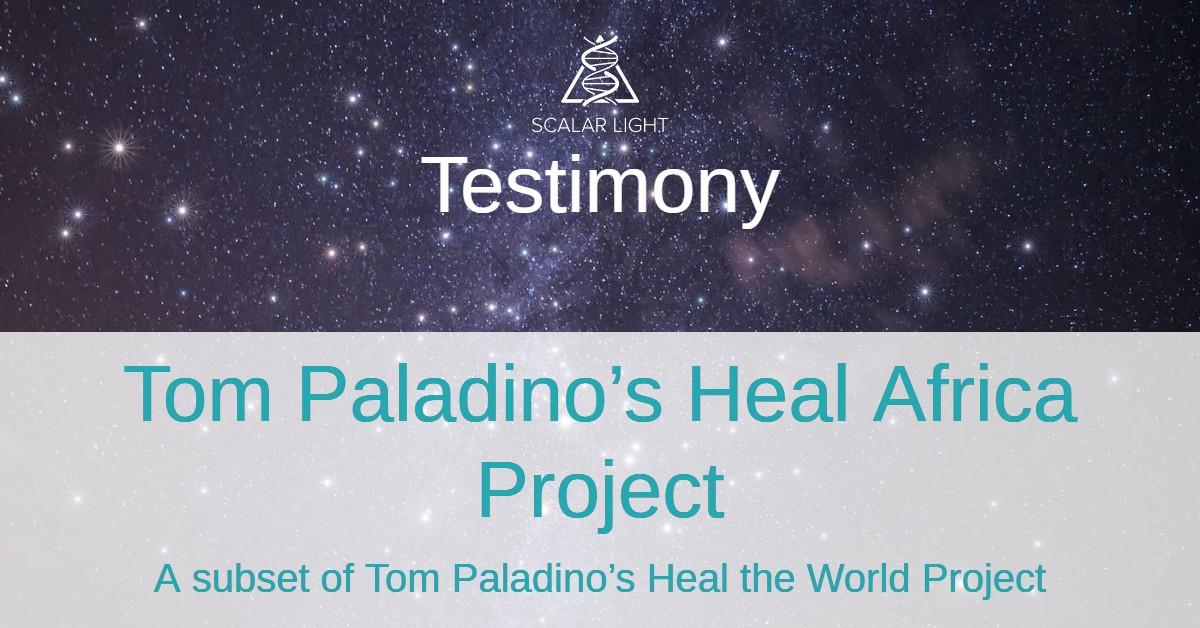 Unless I'm mistaken, your question is: "How is Tom Paladino Helping people in Cameroon  through his Scalar Energy Treatments?"

PART I - MEETING THE PROJECT

My name is Roger BEKONO, I'm a scalar energy healing Missionary for Africa, I'm doing  Nutrition at an American Online University and I’m still working for a prestigious institution in  Cameroon. I’m also the president of a newly created association aiming at taking away infection from Africa through Tom Paladino’s Scalar Energy Treatment. I got in contact with  Tom in October 2015, but I got involved in the Healing Ministry for Africa in April 2016.

When I met Tom Paladino’s “Heal The World” project, through a posted video talking about curing Aids with Scalar Energy, I decided to give it a try. I then registered seven people who had various conditions including HIV and HVB infections. These people were treated for 30  days, from November 10 to December 10, 2015, and I got two of them tested for their CD4  count, on January 08, 2016, at the best laboratory available. According to the norm they use here, which is 700, both people had gone from below 340 to over 690 (see extract below). The full CD4 count result of one person is provided.

One month later, I got the 2 people tested for the HIV viral load at the same laboratory. These  2 people are my elder sister and her husband. I preferred to test a couple I know very well and who had been HIV positive for over 10 years. I reasoned that the risk of getting infected anew through extra relationships was low.

To my greatest joy (no surprise), their HIV viral loads were both UNDETECTABLE. Their full versions are provided (see extract below). Unfortunately, I cannot have their viral loads before the treatments, as they could not afford to pay for it before.

Another person started his treatment in January 2016, got tested in March 2016 and the viral load was also UNDETECTABLE. To cut a long story short, I got enough evidence to tackle the public. The best I can say to end this first part is that the 3 people I’m talking about here are no longer taking any medication.

By the end of March, Tom Paladino saw my involvement in the healing of people through his scalar energy treatment, then he decided to make me part of his team for Africa, starting from  Cameroon.

Here is where the real revolution started as we could now increase the number of people who take the cure, instead of just meeting the few who were able to pay for it. The only challenge remaining was for us to explain what the scalar healing is all about, get them in, and that is what we are doing now. From April 5, 2016, till today, we have already sent close to 18 different collages counting between 20 and 100 people to Tom. Just after 2 months, we already have close to 1000 people from Cameroon, Uganda, South Africa, Ivory Coast, Ghana, and Nigeria who are on Scalar. More than 95% of these people are from Cameroon, and we are planning to increase the count in other countries since the popularity of the treatment is growing as people are giving testimony of their healing.

People are being healed from various conditions, including AIDS, hepatitis, herpes, Sinusitis, arthritis,  diabetes, tuberculosis and various lungs infection, malaria, typhoid and on. Last month, a lady blinded by HIV, living in a Cameroonian city called Kribi, recovered her sight after just 8 days of scalar treatment. As we wanted the movement to have a legal form, we created an Association so that we can have public meetings involving hundreds or thousands of people. In the future,  this Association will be an NGO. We currently have a number of local missionaries who go from place to place snapping people with cell phones and sending them to our base through internet messengers (where the network is available).

Important Note: Tom Paladino collects NO MONEY from us for all these scalar treatments he’s doing. This proves that he is actually helping Africa to get rid of infections. Truly, this is humanitarian work.

Let me stop here for now.

Dear Edith, if you have any questions, feel free to contact me back.